about high school swimming.
I thought for sure I would be a Club SwimMom Snob.
(only thinking club swim was what my kid needs)
And to some degree I do....kinda.

What I saw yesterday, in the pool,
was expected.  As a freshman - she does pretty good for herself
against any and all upper classmen.  OK - she rocks it....
But what I saw outside of the pool, what pretty neat as well.
She will definitely take away something positive from High School Swimming.

This is a picture of Hannah and one of her club swim competitors, Katie,
who is super fast too.  They are total buds.  They have a love and a respect
for each other, which is pretty amazing.  But here in high school, they are teammates. 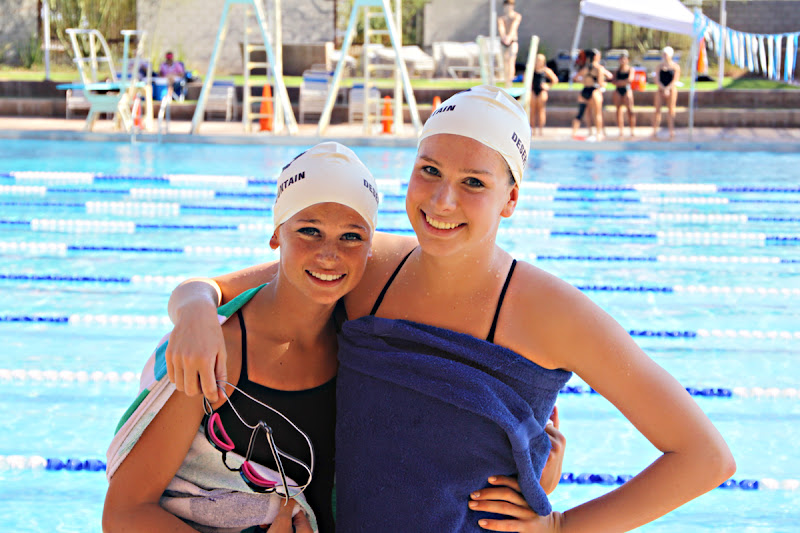 It is sort of weird to see Hannah with a cap on representing a different team...
a HIGH SCHOOL team (I just threw up in my mouth...) 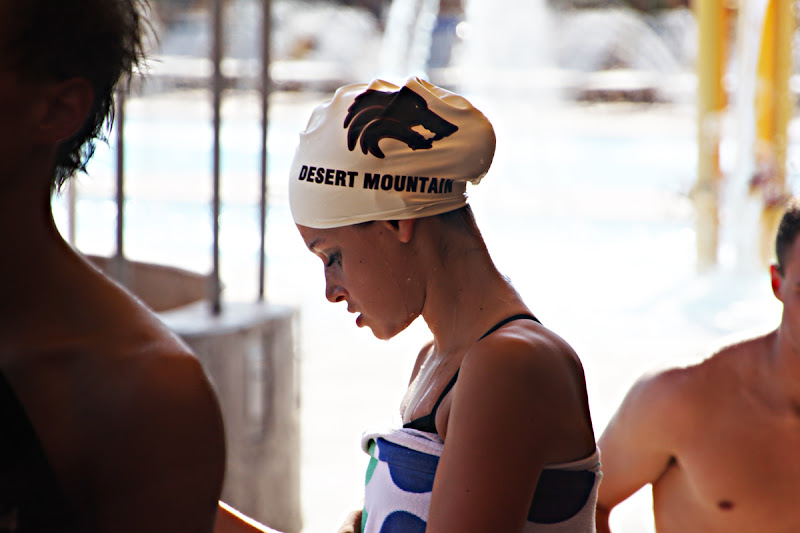 Part of what is interesting about high school swim, is wondering how the coach reacts and interacts
with club swimmers.  With Hannah's team, the coach requires ONE mandatory practice
with him for USA Swimming swimmers, and allows her to still workout with her club for the remainder of the week.  It has become very apparent that while Hannah fulfills her one day mandatory requirement, the coach has a hair across his tusshie about her dedication
to club and not to him.
Why, like my sister said, would he cut off his nose, to spite his face?
Who knows.
Caught this one example actually - with my camera.

Here is a picture of Katie and Hannah, after warmup,
checking the sheet of events where Hannah was entered in
only one event and one relay........ 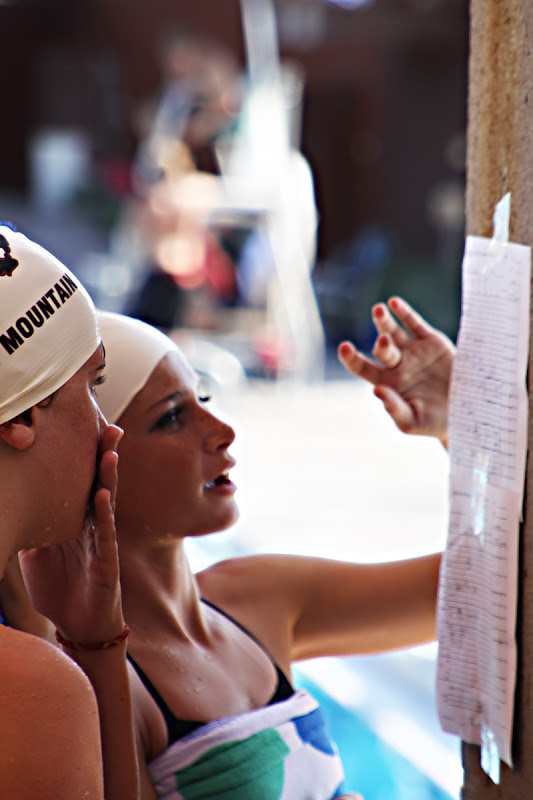 Hannah's got that - "It figures" look on her face, and Katie is pretty much in disbelief.
Good idea, Coach.  Don't swim your second fastest swimmer.  Teach her a little
lesson, eh?
Funny thing is - he penciled her into another event AND another relay right before the
meet started.  I am going to tell myself that it was because Bill and I actually showed up
AND Bill timed.  wink wink

Whatever.  Stupid petty shit.  Let's get back to Hannah....
She swam great and is sure to be included in all future meets, I am confident.
wink wink, again

Her fly looked exceptionally good last night and she asked me to post these pictures
so her old coach and her new coach, for club, could see.

So here you go. 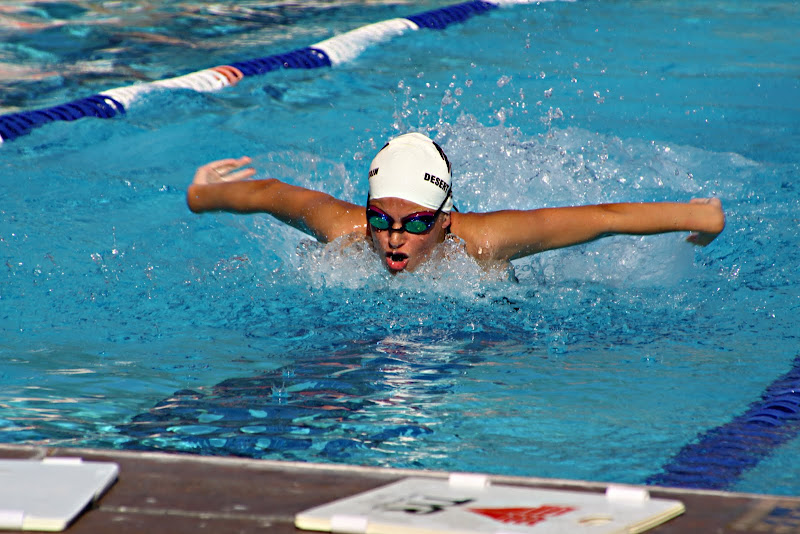 Check out Hannah's reflection in the next few.
Pretty cool shots, if I do say so myself. 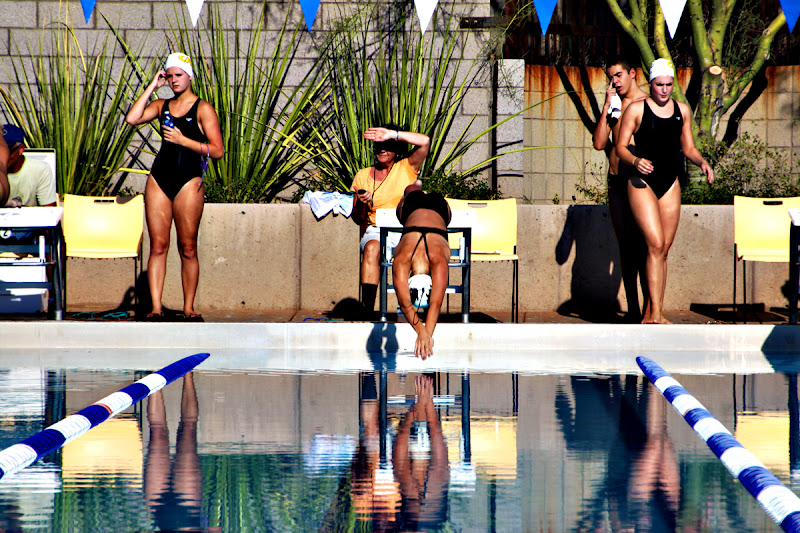 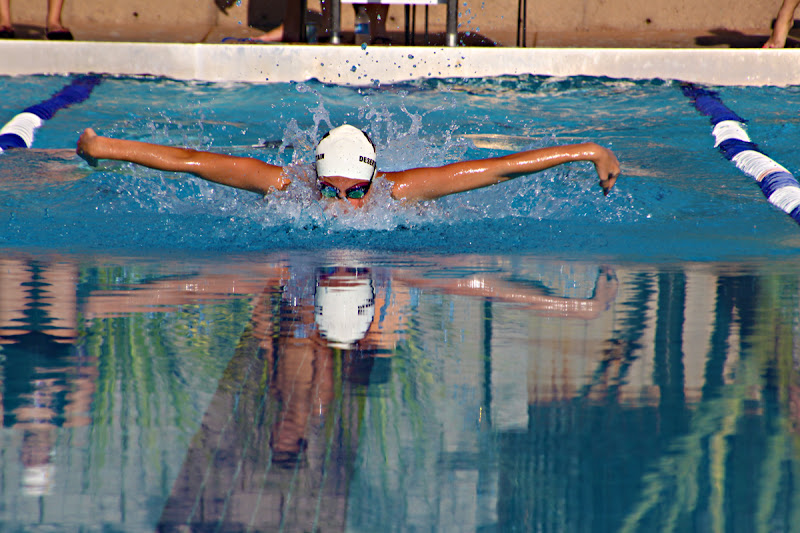 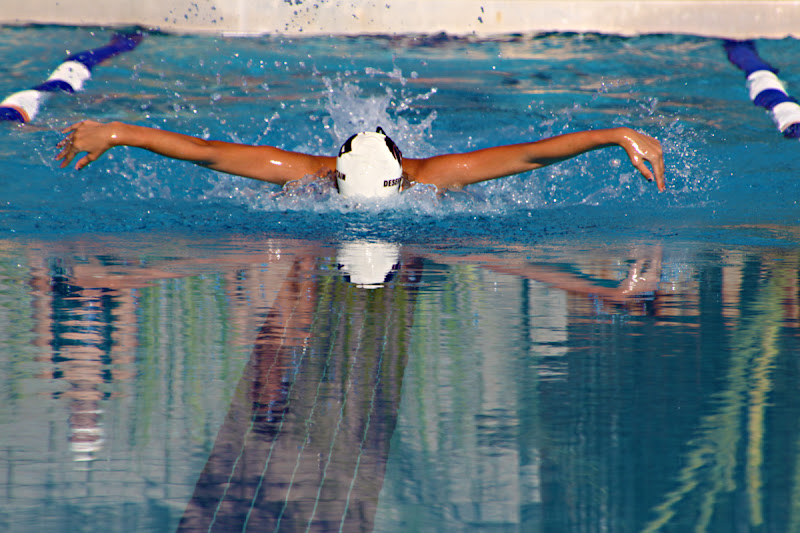 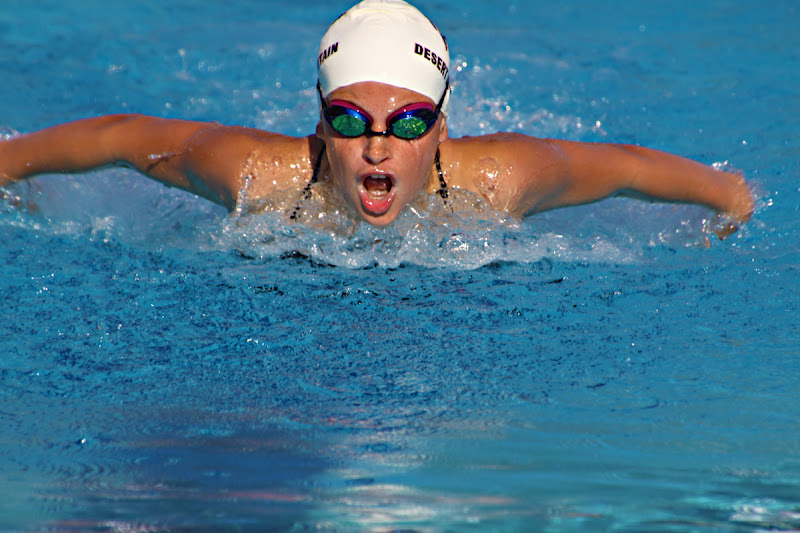 It was nice to see all the kids gather together and the camaraderie they all share.
Hannah says that not one of them treats her or Katie any different or as an outsider,
seeing as the two of them kick everyones butt......and are freshman.  I know
from being a teenager, that respecting one another and being nice isn't always
one's first option when going through such an insecure time in their life.
Just a part of growing up, I know.  So - so far - so good...

My last thought in all of this...
how this differs from club.
Well.
Boys
Boys
and more Boys.
Boys that I do not know.
Boys that my daughter likes.
And boys that like my daughter.

I'm going to end on that note.
And go buy some long pants and turtlenecks for Hannah.
according to Gini at 6:19 AM

LOVE the photos. . . when you leading, you got clear water for reflection !!!

Someone told me high school swim changes club swimmers - - makes them better, teaches them about a team, and being a part of a team !!!

We can rent a tower somewhere together, if I can stick Abby in it with Hannah when she gets older ; )

She is a rock star, PERIOD. In whatever "swim" capacity she is in. And ALL those who coach her, are going to very quickly find that out!