you'd think I was pregnant....

after the day I had today.
I could NOT get out of the kitchen.  Well, 2 or 3 loads of wash went in the
machine today as well.  Kinda sounds a little like nesting.  Anyway, once I got it in my head
to start cooking today I couldn't stop.  And I hit up the grocery store in between to grab
a few items to keep cooking......wierd I tell ya'....wierd.
So everything in the kitchen started with Connor.  I know - sounds odd.  Connor, Mr. Wait Til The Last Minute, had to try three new foods.  By today.  Or tonight actually.  Then he had to write them down and I had to sign it, verifying that yes, in fact, he touched his sensitive, little tongue to food unfamiliar to him.  So the three items were - jicama, pickeld jalepenoes and plantain.
The jicama - well, I only have eaten them raw.  I either slice them up or dice them and put them in a salad.  SCORE.....because he actually liked it.  Ate more than one piece.  The plantain and pickled jalepenos combo came to me when I was watching one of my favorite cooking shows on the Cooking Channel called Everyday Exotic with this chef named Roger Mooking.  CLICK HERE for the recipe he made this past weekend.  He will probably never eat either again, but he a least tried them....which is huge for him.
Oh, speaking of cooking shows.  With the vast array of cooking shows on tv, not only on the Food Network and the Cooking Channel, but others - seriously?  Why would anyone buy another cookbook?  I have cookbooks.  Quite a few of them.  But for me it is all about the pictures.  If there are no pictures, I don't buy it.  And they have to be awesome pictures.  Which is why I am loving the cooking shows.  You can see the stuff as it's being made.  And completely base your decision on whether or not you'll be making something, strictly from how it looks.  Which brought me to the plantain and jalepenos.....
So I got a little ahead of myself. For dinner I planned on making a mushroom barley soup.  It was really great.  Onions, garlic, chopped carrots and celery sauteed in olive oil.  Pre-cooked some barley in a separate pot.  Filled the dutch oven that had the sauteed mirepoix (fancy french name for the above ingredients)
with water and added some beef boullion paste stuff I had in the pantry.  Brought that to a boil and added the barley to further cook, a couple of hours at least.  Sauteed a whole boat load of chopped white mushrooms in my paella pan - that's how many mushrooms I used.......Added those toward the end, before serving.  Call it soup.
Desert was next on my list.  I saw this A.MA.ZING recipe HERE.
Pavlova.
Like, was I nuts or what?  Pavlova - a huge meringue.
I have tried to make small, tiny, cute little yummy meringues for ever.......
I just can't.  I don't know what the hell I am doing wrong, but they never come out.
But this - I wanted to try.  Maybe it was the 40 pounds of whipped cream that gets plopped
on top of it.  I don't know.
I am embarrassed to say - We ate that thing so fast tonight, that I only got a picture of the crumbs that were left. 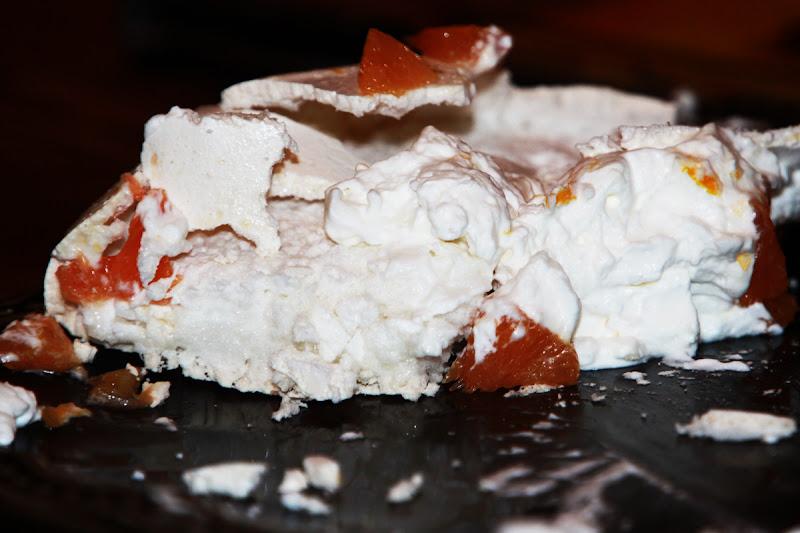 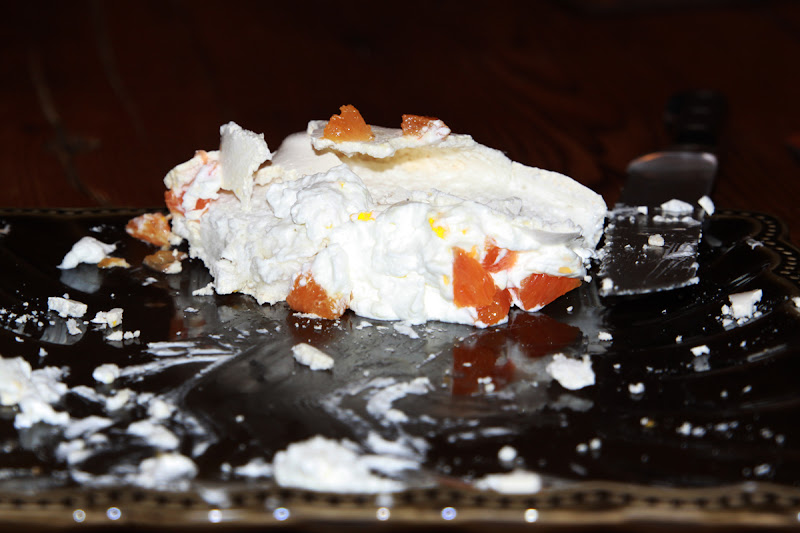 The recipe stated you could use fresh fruit on top.  I used whipping cream which I added a touch of sugar and grated orange rind from some awesome Cara Cara oranges I had laying around.  I took a couple and diced up some sections to drop on top of the mountain of meringue, topped with the even bigger
mountain of whipped cream.  It was a puff of heaven!!!!!!!!!!!
All I have to say is -
it's a good thing Bill is traveling the next few days.
I can eat cereal.......
according to Gini at 10:06 PM