I suck at baking.

Well.  Maybe I don't suck at baking, but I am not completely
comfortable baking.  Baking is so precise.
For example this past weekend we made homemade cupcakes
and frosting.  The frosting took two attempts.  The first one failed
miserably, the second was much better.
Not that I ate any of the cupcakes......alright I did.
So.  As a result....I do not bake very often.
But cooking a good meal??
THAT I can do with 99 percent success.
So I'd seen a recipe posted on The Pioneer Woman for
Sour Cream Enchiladas.
And because I am resistant to precision I made my own version.
Oh, and my food photographer didn't show up today so you'll have to look
at the crappy pictures that will follow.
So if you want a recipe - go buy a cookbook,
otherwise, hold on tight, and follow along....

So my ingredients.
*Large Tortillas since we eat large around here.
*I cooked some rice.  (sometimes I cook rice and beans, sometimes Spanish
rice, but tonight was just plain ol' white rice)
*Heated a can of mild enchilada sauce in a large fry pan.  One big enough to
float the tortillas in, one at a time, later.
*Browned up some turkey burger (I usually use ground beef)
and added Adobo seasoning, cumin, and mexican oregano.
(no I do not know how much....I sprinkled...)
*Opened up a can of pinto beans, drained and rinsed and set aside.
and here is what I swiped from Pioneer Woman....kind of.
*I used shredded Mexican cheese, sour cream and some cilantro,
mixed it all together to make a gooey mess.

All these I gathered in assembly-line fashion.
The second thing I "learned" from Pioneer Woman....
I dipped each tortilla into the enchilada sauce to start.
Laid it flat on the baking pan,
plopped on the sour cream/cheesey mixture,
rice, meat (ok, it's turkey),
some beans and rolled 'em up.
Poured on the leftover enchilada sauce, 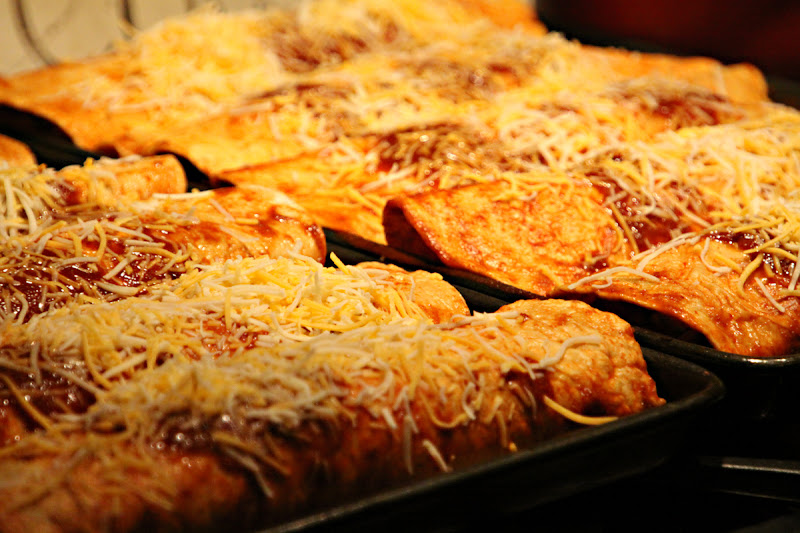 and of course, added some more shredded cheese! 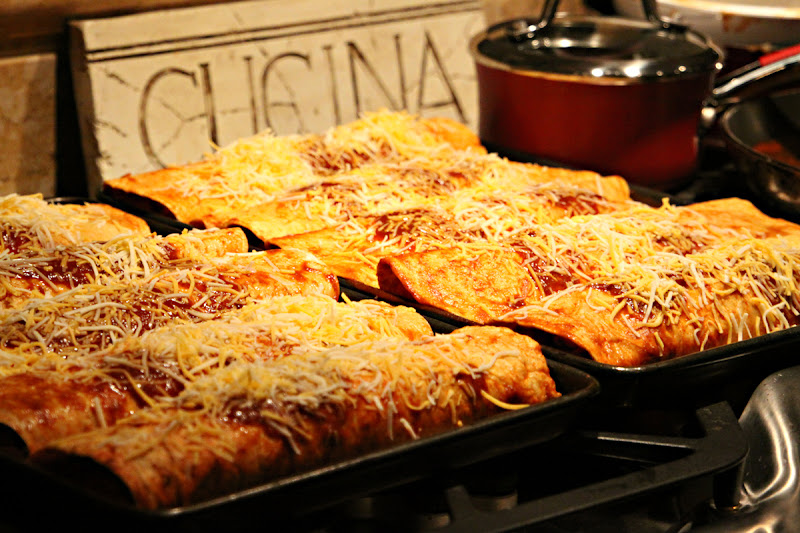 Baked them for about 20, 25 minutes at 375.
They got crispy outside, and gooey inside.
And this sucky picture doesn't even come close to how good it was. 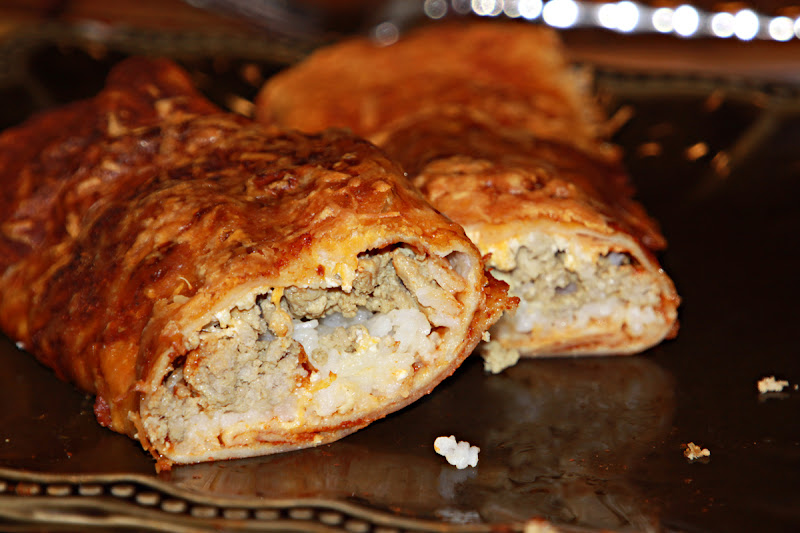 So thanks to Pioneer Woman for giving me the idea,
and then changing it into something that really is nothing like her idea.............
Does that even make sense?
according to Gini at 8:26 PM

YUM!
I will do this, MEATless, very soon.
YUM, YUM, YUM!
(btw, getting healthy - get rid of that white rice nonsense. you might as well eat sand. brown, baby - or better yeat - quinoa or barley! yum!!)