Just going with the flow...

blood flow, that is...
So anyway. Having a third child at 40.
Well, you kind of just go with the flow with everything.
Your first you for sure freak out about stuff,
a little more laid back by the time the second one comes,
and god knows when the third arrives,
I mean really....whatev....
Now I would have to assume that the kids are pretty much the same.
Hannah did, when she was younger, have a tendency to get a little freaked out
about stuff.
And Connor, oh boy Connor, takes everything that happens to him, like
the world is crashing in around him and going to come to an abrupt stop.
Now these reactions could stem from any number of things.
vomiting
sneezing
bugs
diarrhea
scraped knee
water up their nose
buying the wrong kind of bread...
you get me..
Now Garrin is a whole different breed, man.
When I say he just goes with it....I mean he just goes with it.
Pukes the bed? Comes in to get us, not panicked, and then proceeds to
puke in the toilet, nice and neat, until he is all done. Sometimes with a smile.
Hannah just feels the urge and cries for me to come in and sit with her,
no matter how long. So we sit and sit and sit...
Connor, well, he pretty much thinks we need to start picking out coffins for him
when he starts puking. It's all over for him, by that point.
So this morning, I'm finishing packing up Connor's lunch to get the boys off
to school, when out of the bathroom walks Garrin....covered in blood.
Covered.
There are little droplets all over the tile marking his trail from the bathroom to the
kitchen. He's got a stream of toilet paper in his hands which he'd used to
try to clean himself up. Wasn't having much luck, so came out to ask me
for some help. No crying, No screaming....we actually had a conversation..
(in which of course, I'd asked him if he was picking his nose prior to the bleed...)
Got him all cleaned up.
Threw on a clean shirt.
Loaded up in the car. 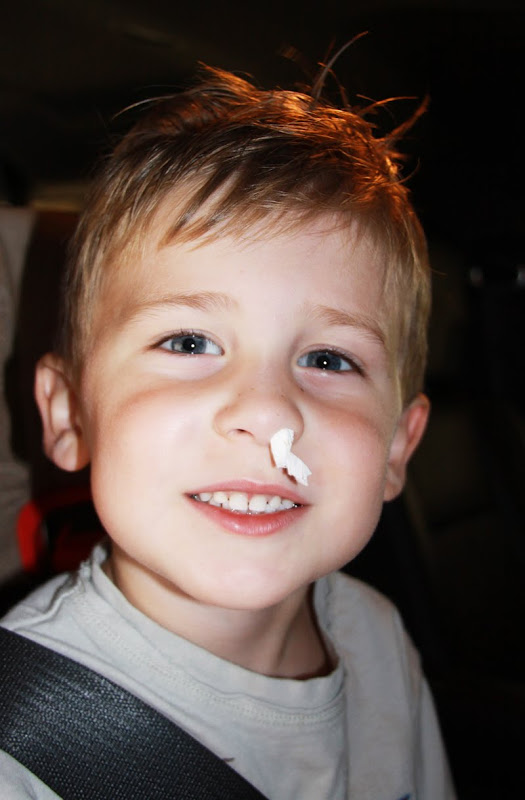 He is quite the trooper....seriously.
Too bad this super awesome rockin' T-shirt... 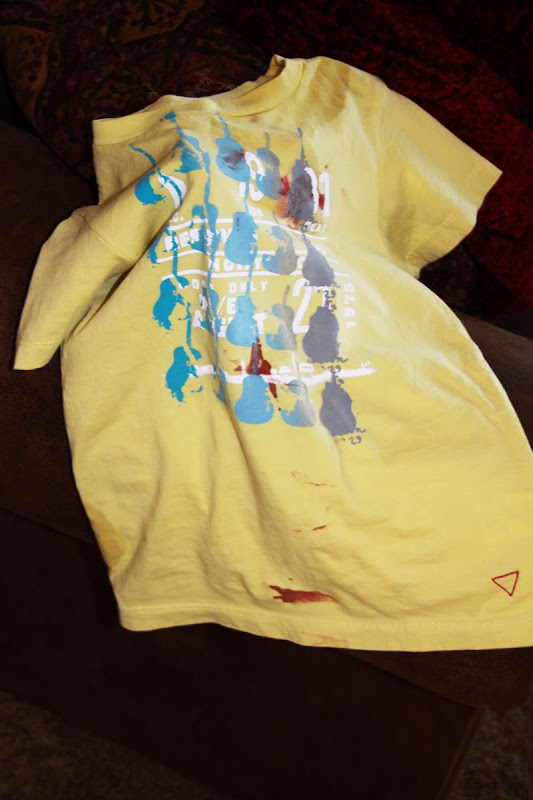 is ruined. Hope I can get all the blood out!
It is GOOD to go with the flow!!!
according to Gini at 9:20 AM

soak it in ice water. That's what I do with Tyler's shirts. Tyler has tons of bloody noses, all due to allergies and his nasal spray.

Isn't it funny how three kids can turn out so differently! I love his little personality.