Hannah and Connor saw a movie with a boat-load of friends last night.
After we dropped them off at the theater, we were contemplating
where to go to grab a bite to eat. Within close proximity to the theater
were a bunch of cool places -
a Cuban restaurant
a Mediterranean restaurant
and a Vietnamese restaurant

We opted for Vietnamese. We had Garrin with us so we knew he would adapt to
any cuisine....he's just good like that. Sort of like my nephew Matthew. Eats
anything! So we haven't had Vietnamese in forever. There was an amazing
restaurant we would frequent back east....and that kind of spoiled it for us.
We've been hesitant ever since - kind of thinking there would never be
a place that compared.
We ordered spring rolls - fresh ones and fried ones. Mmm. Every bit
as good as the ones we remembered! Garrin wanted spaghetti so the
closest we could get to that was rice vermicelli noodles with pork "meatballs" and beef.
Bill ordered a pancake...which he has been craving for I don't know how long!
I was going for something spicy. 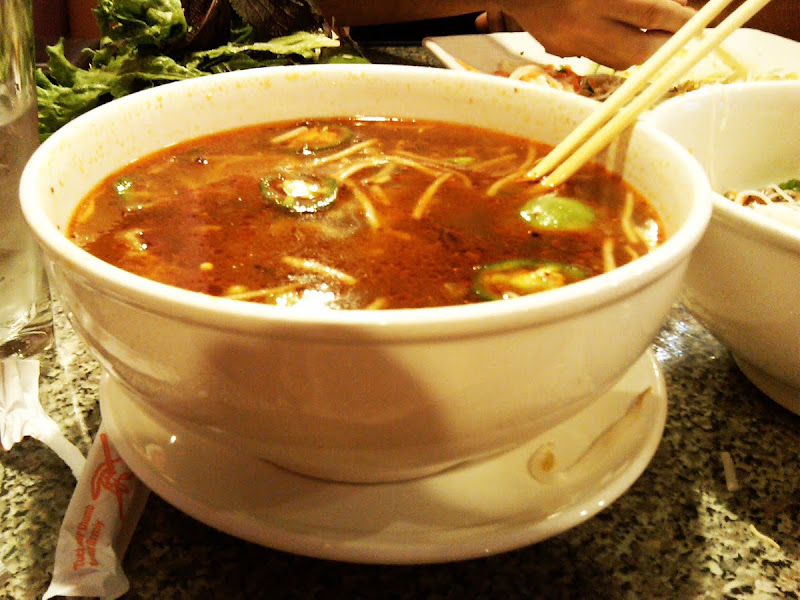 I chose Pho, the Vietnamese noodle soup. I ordered the beef one which was super
spicy. The waitress looked at me and with all seriousness asked me -
"Do you want that Vietnamese style with the pigs feet and the blood?"
I looked at her and said -
"Wha....what?"
No Pho-kin way lady.
All was good. In the end, a great meal with my guys.
And a new restaurant to go back too.
I've suddenly got the urge to roll around in the mud.
I'll see ya' tomorrow!!
according to Gini at 11:23 PM

Did you guys go to Lemongrass Cafe? I've been wanting to try the pho there and hopefully cut down on the trips to the other side of town.

Yes to jalapenos, basil, sprouts, and I second the no pho-kin way to pigs feet and blood -- eewww!

You are a crack up!!! I just love you. It actually sounds so good. The way you describe... are you sure you aren't a writer???
BTW...What are you reading?