I know you are all waiting with bated breath for this one.
The first weeks result of the newly instituted fake money motivator
challenge.
Let me first clear the air on one thing.
NO
I am not copying money on a copier.
I know it is a federal offense and would be totally pissed off
if that was the reason I got arrested. I'd rather it be for
something like choking someone on my HOA,
or something like that......
Anyhoo. Here is a picture of me holding
the fake money. It is teeny tiny compared to the real thing. 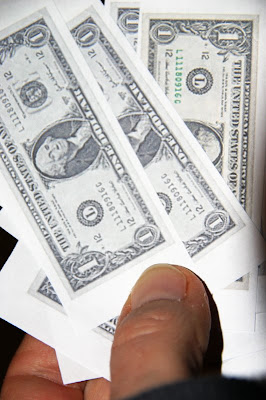 See?
I know, I know. I need a manicure. Maybe I could take some of this money...
oh wait.
Nevermind.
So I counted how much money is in Hannah's envelop - 17 bucks.
And Connor's - 21 bucks.
So here's what this tells me so far.
Guessing at first, that my kids would run though this money right away,
apparently I think they behave way worse then they actually do.
You know this for a fact. Someone comes up to you in a restaurant
and say "My. Your children are so well behaved."
You smile a very fake smile while saying "Oh, Thank you. Thank you for
noticing" while thinking " you have GOT to be kidding me??"
No. For real. I thought they would be done with it quick.
This also tells me that money obviously motivates my kids way more
than any punishment from electronic devices, cell phones, computers,
wii, playstation, etc etc...I fully admit to bribing my kids to swim well
with a little cash as a reward. And don't give me that look,
a lot of you do it too.
It reassures me that my kids have the capability to shut off lights behind them.
They can bring backpacks, lunchboxes and swim bags directly into the rooms
they belong in immediately.
They can speak to us and each other respectfully.
They can get along with one another.
I now know that my fears of my children growing up
to be irresponsible, uncaring, lazy individuals
is about as ridiculous as me losing
25 pounds by tomorrow night.
As I told my girlfriend about how all this is working in our house,
I have to admit.
There is not a lot that I ask of my kids
during the week. With their very full schedules,
I am happy knowing they
1. go to school everyday and work their butts off
2. swim everyday
3. master the art of time-management
to get "it all" done and done well every single week day.
So because my kids don't do too many chores during the week,
they are pretty loaded down with stuff they are responsible for doing,
all weekend long. And my point here is - it is almost
like giving them an allowance,
only I can take it away as quick as a wink.
But I have to say, my daughter initiated doing a puzzle with Garrin.
Which I love. I love to see she wants to play with him.
Yes, I gave her a dollar for that, but the point I am making with
all of this that I am not just on their backs constantly about what they
are doing wrong, but that I watch very closely and do notice
what they are doing that is right.
My son has taken the garbage out to the garage more times than I can
count and putting a new bag in the basket. All without our asking.
I thanked him and gave him a buck. I like that he takes
the initiative to do something on his own.
So they both earned a couple of dollars
but got a few taken away. Hannah, a few more,
than Connor. (It's the tween attitude thing that's getting her
in trouble.....)
In closing. It has been a miracle.
This has been the best week.
I, too, have behaved myself.
I find I am yelling a whole lot less
much to my kids and my neighbors pleasure.
Let's see, if the new-ness wears off this up-coming week.
I'll keep you posted.

This might be one of my best ideas yet.
according to Gini at 7:15 AM

Sounds like you found a good thing! I might just have to bite this idea. Oh, and so happy to hear you're a law abiding citizen - hate to see "going to court" on your to do list!

Glad to see it's working. Nice job, Hannah and Connor!

Now you can write a book about this new and successful discipline method and make a butt load of money.