look what I found..

"Also called "St. Joseph Day cakes," zeppoles are a part of the St. Joseph Day celebration on March 19th.
Some say that the tradition of St. Joseph’s Day began in Sicily, during the Middle Ages. There was a severe drought. The people prayed for St. Joseph, their patron saint, to intervene. They promised him that, if he answered their prayers and brought rain, they would prepare a big feast in his honor.
Their prayers were answered and the rains came. True to their word, the people of Sicily prepared a banquet and placed huge banquet tables for the poor of the town to enjoy. The day is a day of generosity and kindness. It was not only a way for the people of Sicily to thank St. Joseph for answering their prayers, but a way to share their good fortune with the poor of the town.
Today, the St. Joseph’s Day Altar is still adorned with special foods, flowers, linens, statues, holy cards, candles, medals, wine, and specially prepared breads and cakes. The breads sometimes take the form of fish, because the tradition began in Sicily, where shellfish and fish are more plentiful than meat. Also, no meat is allowed on the table, because the feast day falls during Lent.
The St. Joseph’s Day cake is called, Zeppoli, an Italian bread dough that is either fried or baked. The filling is usually a custard, but some bakeries use cannoli filling." 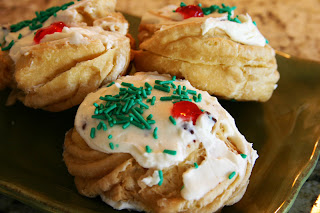 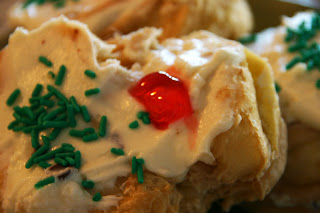 OK -so you may be wondering what could the Feast of St. Joseph mean for an American/part-Italian/part-German household?
Pretty much nothing but an excuse to get our hands on these yummy treats that are served only this time of year. I best not even step on the scale tomorrow. After all I am eating these as an honor to my Italian heritage, right?

Yum yum yum!!!! I am happy to eat yours for you if you are concerned about your scale reading. Oh, and I understand Chris is driving around with his AC blasting as cold as it can go to keep mine cold. Good man!

Glad you were able to find some!

oooh, i love zeppolis. we used to get them at the san genero festival in nj every year. they also had them on the boardwalk down the shore. they are the best warm, with powdered sugar sprinkled on them. where did you find them? let me know if it was anywhere near summerlin, so i can head over and pick some up.