It is usually a sports filled day, here at our house. Soccer games, swim meets or just workout. Most Saturday's Bill and I just go our separate ways with one or two of the kids to get whomever to their sport.
We were up at both out by 8:30 this morning. Poor Garrin who may have slept in today, had to be woken up to throw on some clothes, throw some food in his mouth, and thrown in the car. He came with Hannah and I - she had to be in the water at 9am for workout.
Bill and Connor headed to the soccer fields, and I had hopes of speeding to the game after dropping off Hannah. I cannot stand being late. Garrin and I arrived about 10 minutes into the game - we were up 2 to 0 already. Right On - It's gonna be another blowout - I can feel it. Scorpions played awesome as usual - final score 11 to 0. With the energy pumping (the caffeine, really..) I glance around the soccer fields on my hasty retreat to the car, to see if I can see any friends/their kids playing (Hello Jer, Hello Gail......) didn't see anyone so I headed straight back to the pool to pick up Hannah.
Arriving right before 11, I got to chat with some friends and watch the kids - in the water for another 1/2 hour. They are on what is called a "taper" - meaning the yardage they swim is cut back day by day to get their (in Hannah's case - little) bodies ready for a big meet. So let's say they typically swim 5000 yards a day (which by the way is totally incomprehensible to me, I lose count after about 10 laps) - day by day, yardage gets cut down to, let's say, 3000 yards. Which that too, is incomprehensible to me because I can't swim 25 yards without the lifeguards calling 911 - hence the size of my butt!! Anyhoo....after Hannah swimming 2 1/2 hours, we head home.
After my sitting at the pool, and Bill standing on the sidelines yelling at the boys at the game, we decided we really, really, really...
needed a NAP.
Two hours later.....we wake to the kids "high" on candy and soda that they have been enjoying while watching Disney Channel. Candy wrappers are everywhere, Garrin is dirty, and naptime for us is OVER.
Because the weather is just perfecto right now - we played outside with the kiddos, took down Halloween decorations, rode bikes, etc etc.
The big boys are off to a quick birthday party and then a hockey game. Us girls - we are going to pop some popcorn, get an on-demand movie and put Garrin where he needs to be - IN BED. 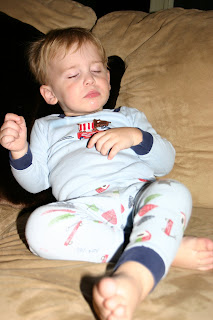 Another fun filled, stress filled, tiring Saturday at our house. Is is Sunday yet?
according to Gini at 6:58 PM

I saw you headed out!Maggie scored the only goal again today!whoooo hoooooo

Life of a Banana said...