a day in the life of the binkie

Now, if you are friends with a pediatrician, or a pediatric dentist or a speech therapist, please do not forward them my blog. This post is NOT for them. 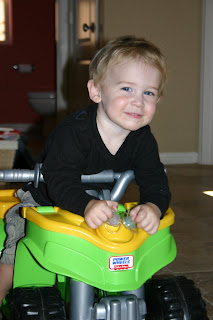 The Binkie, sometimes otherwise known as the nuk, the no no, the bink, the plug etc etc... let's just say, it's a dirty little secret here in the Land Of Garrin. Hannah had her thumb, Connor had a nuk for a short, short time, and Garrin has the B-I-N-K-I-E (we spell it when Garrin shouldn't hear me talking about it).

So his 1st birthday comes and goes, and my promises (to myself) to get rid of this thing, pass by. Then the promise was 18 months. He had gotten very sick and had to go to the hospital and I felt bad and yadda yadda yadda, got the binkie whenever he wanted. So then I am thinking - OH BY 2 FOR SURE! No kid of mine is gonna have this thing in their mouth......well, we are 2 weeks too late for that one.

Now mind you, we don't travel with the binkie, ordinarily. He has it for nap time, if that happens, and at bedtime. Period.

Today was an EXTRAORDINARY NEEDY DAY, evidently. Starting out with my having to go to a meeting this morning. I brought it with me "Just In Case". So when Garrin decides he is going to "read" his book at the meeting, I pop in the binkie, and to my surprise - he talks right through it - likes its not even there. So now the general public has seen that have popped in a binkie into the mouth of my "large-sized" two year old. Hmm. No going back from here now. Meeting's over, on our way home, and he is sucking sucking sucking like he just can't get enough binkie - "Gotta Have More Binkie". (Reminds me of one of my most favorite SNL skits - Gotta Have More Cow Bell). Anyhoo. Falls asleep, get home, up to bed. 2 hours later, down he comes with not just the one binkie, but another one he mysteriously found. You know what I'm talkin' about - they are everywhere in this house, I just can't find them myself. So then he plays for awhile never letting go of them. And it has turned into one of those days that I would just rather let him have it, then listen to the tantrum he is going to pull if I try to take it away. It's nice out, all the windows are open, and I just don't want to deal. So, then one manages to go with us to school, to pick up Hannah and Connor, then to the pool and then back home. Forget dinner, because now back home, he has found the secondary replacement and is taking sucks between the two of them, alternating every 35 seconds or so - back and forth, back and forth. All instead of eating his meal. And now dammit, it's bedtime. Now when he can have it, he has located another and now has three. He spyed one behind the couch, and because the windows are still open tonight, I move the couch and let him go for it - after all - he is going to sleep now, right?

And this is what I get: 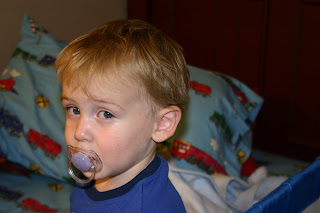 Life of a Banana said...

nice...lots and lots of binkies